Do you use a content feeder for your social media? 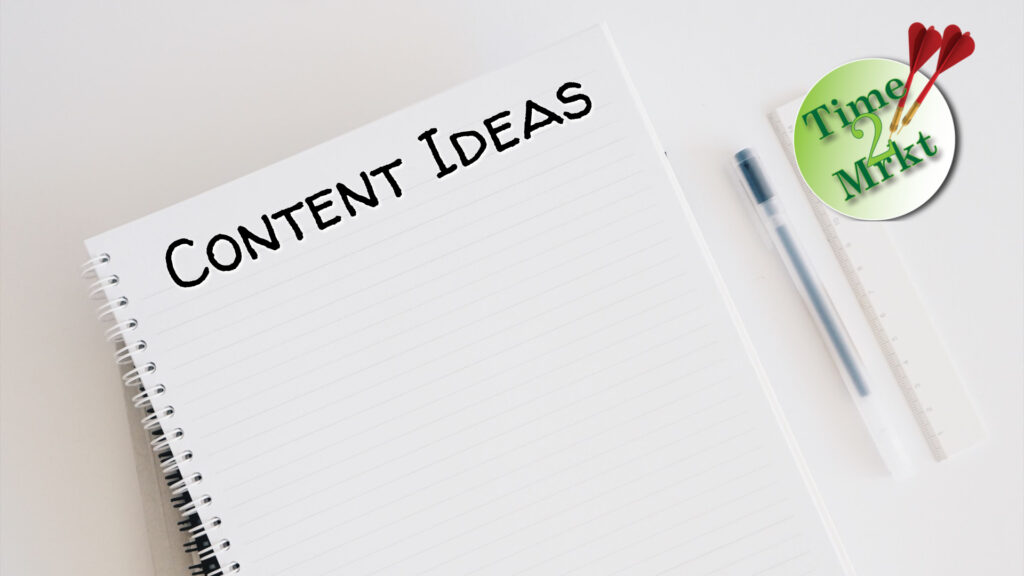 Innocently enough, I found a post that I would never have approved that made it out to my LinkedIn feed. My associate caught the title of the post that had come from a source that I trust within a content feeder that I use for my own social media. (You know the shoemaker’s shoes story right??) Most of the time the content is spot-on, but for some reason this particular post addressed an industry that is thriving but that I would not promote. I didn’t even take the time to look at who the source of the article was. I only trust information from a select few sources.

The lesson learned here is:

Even if you use a source or service you trust – read what goes out on your social every day!

Case in point – the other day, we posted an image for one of our customers. The image had been supplied by a field rep of the company. Unbeknownst to us, the image violated some OSHA rules. As soon as the “boss” saw the image, he texted me to take it down. Things like this happen and we react as quickly as possible. Fortunately, no one had reacted to the post on my company page and no one had reacted to the OSHA violation post.

I need to post, but I have no time!

You want more customers. To get them, you have to advertise and market your business or network. One of the (not so new) avenues is social media.  You can post your own content. There are challenges that you may face with that:

To bring the story home further, if you don’t have the time to post to your social media regularly (sometimes as little as once a week can boost your organic results with social platforms) try using a service or a content creator to help build a cache of posts that you can schedule. Or there are other services available if you search.

Whatever you do, find a representative that will uphold your brand. We provide a couple of options for you:

No matter which option you choose, we work with you to find out the important topics, keywords and resources to use to represent your company on the appropriate social platforms for your business.

What is your commitment level to your social media?

I just read this article about social media commitment from the  Deleware Business Times . There are a few points I would like to expand on. 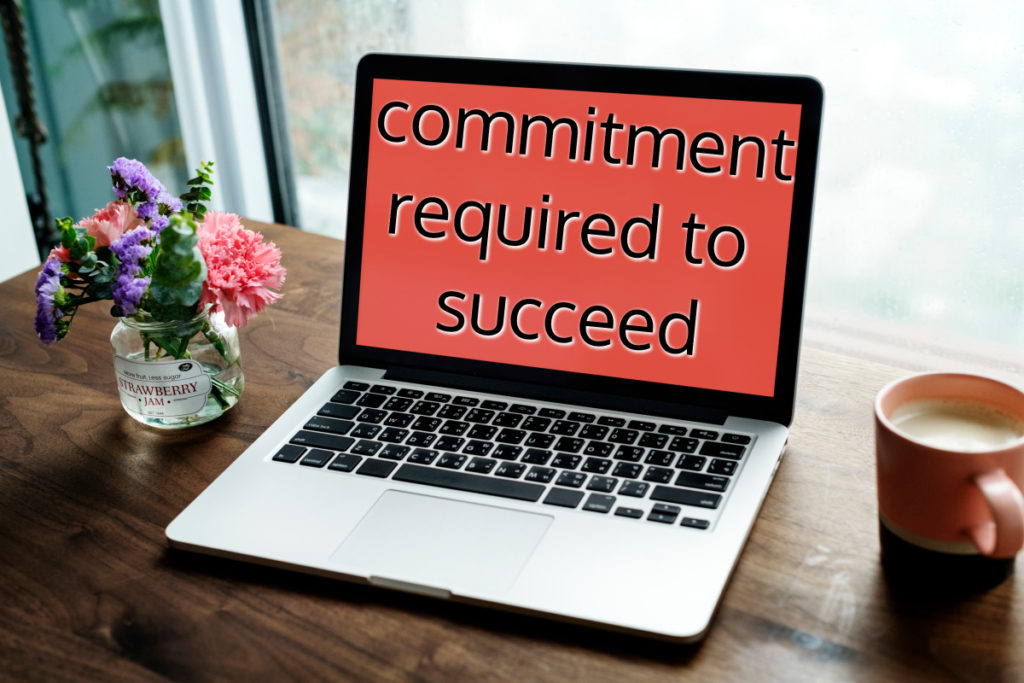 I can be as guilty of this as the next person. I go for stretches where I don’t post blog articles and then I don’t have new content to share socially. Then I might binge for a bit and have many weeks in a row where I write fresh content. This is where knowing how to schedule things plays in your favor.

I visited a website of someone I met at a networking event. The blog posts on the site were from 2014. That is not going to bring the search bots back very frequently. Write when you feel like writing or schedule a time to write. Save drafts of things that are on your mind and make a weekly commitment to completing the articles you started. If you can schedule the posts for once a week, you are really only spending an hour or so to write the actual articles. If you are using WordPress, there is a plug-in called PressThis that can help you with drafting your ideas. WordPress lets you schedule your posts.

Track what is happening

Using alerts and checking periodically during the day can help you be aware if your content on social media is getting traction. The article says that unanswered posts tells people that you don’t care. If you do find an old post or comment, answer it anyway and apologize in the comment for just seeing it.

Do what you have time for

If you only have time to do one thing on social media, DO IT WELL! Don’t spread yourself too thin because you think you have to be on all the platforms all the time. When people ask me what they should do with limited time, my answer is always create content on your website – blog. Then, pick one social site where the majority of your customers are and use that to drive them back to your website. Use scheduling when possible, or mobile if you can.

If all else fails, give me a call and I can walk you through strategy or take some of the burden off your shoulders. Do what you do best and let me do what I do best for you!

Does your marketing work better when you use a social media checklist?

I know that when I have a list of things to do, a checklist makes it easier for 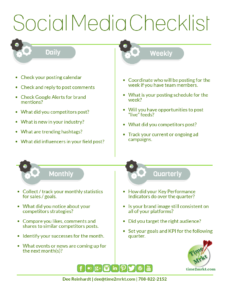 me. Some people use a digital version. I still like a paper and pencil type of list. OR I put things on my calendar and assign it a time.

Use the tools on your checklist to help you maintain your posting schedule, monitor your goal achievement, check out what the competition is doing and where you will go next.

If you have any questions, or would like assistance in setting up your personalized checklist, I would be happy to assist. In the meantime, you can download this pdf version of the image above – social media checklist

The original inspiration for this article came from this source.

Knowing the answer to What Would You Do can be difficult 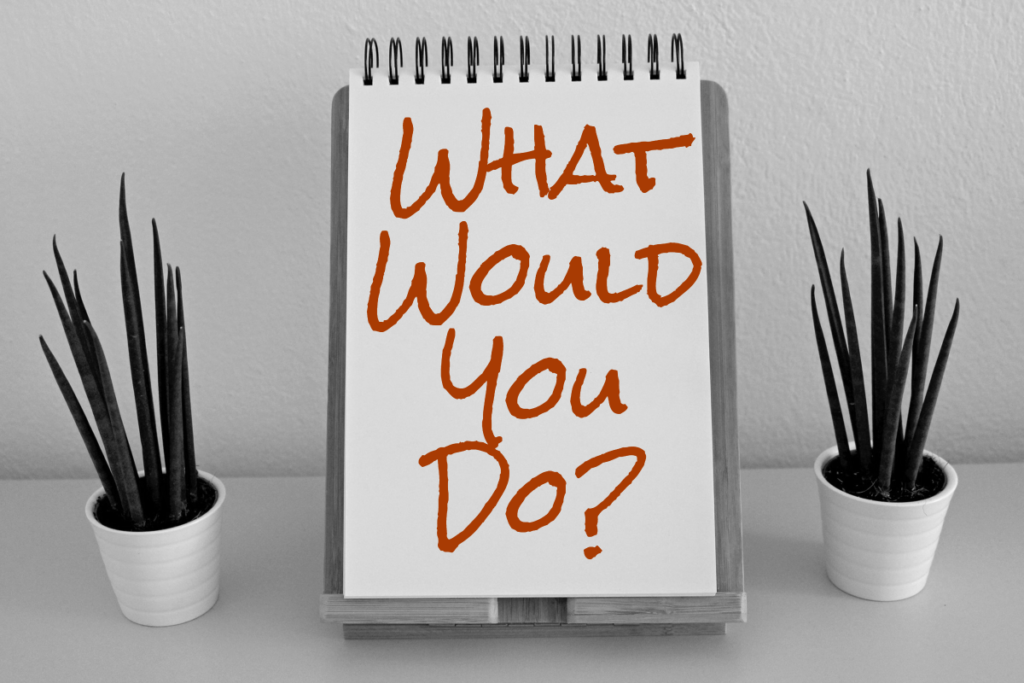 Here is the situation:

Recently, I saw a post from a Facebook connection. It was a video and social commentary on a rather sensitive topic. What I saw in the video was a bit different than what the poster had expressed in the written comment. I began to write my response to the post about 5 different times. Eventually, I ended up not typing anything.

Each time I would start thinking I was taking a different tact, but ended up deleting the response because the written word and a post is forever. It is so much more difficult to know the tone and intent of a comment when written than when you are speaking directly to that person because you are able to see the non-verbal communication.

Because of an experience I had years ago on a chat board with trolls who posted to cause a disturbance, I am much more aware of “newbies”, or even someone who has been around a long time, could take the written word out of context and think an innocent comment is a personal attack.

Additionally, I didn’t think that my comment would be taken in the right context as I could be considered on the opposite side of that particular sensitive topic.

Here are some thoughts to help you figure out what you would do:

Remember, you will probably not change the opinion of the person to whom you are commenting, so is it worth the angst you might feel when the return comments are heated, pointed or vengeful. (I just had a thought that I wouldn’t be writing about this, if the item or the issue were positive, like beautiful flowers or gorgeous scenery.)

What else would you do?

Speaking to the Associated Colleges of Illinois on LinkedIn

On November 3, 2017 I spoke to the Associated Colleges of Illinois about using LinkedIn and other social media to reach out to potential students.

I went to LinkedIn and compiled into one document the items that are associated with creating and using a University page on LinkedIn. If you want to download it click this link – University Pages on LinkedIn.

One of the things I noticed as I was researching all of this is the fact that they differentiate Company pages from University pages for the alumni aspect of the pages.

While many businesses have alumni, not all of them will talk up the positive aspects of that business as they may not have parted company in a good way. 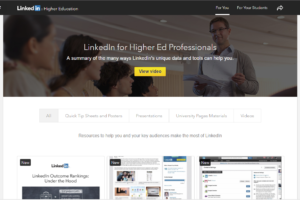 LinkedIn has a whole section of videos and resources for higher education professionals. Take a look at them here. I watched the videos and hope to be able to share more information on the differences to other learning institutions who might have alumni like high schools or prep schools.

I also addressed why social media is important to incorporate in overall marketing plans. (Need me to talk to your group about that?) Here is that handout. Why social media

Last but not least I provided everyone with a copy of my current version of the LinkedIn takeaway from when I teach hands-on LinkedIn workshops. It is here – LinkedIn Take Away. (Need your group to learn more about their personal profiles and what to do with them after they are up to date?)

How to Radically Improve Your Organic Facebook Marketing dlvr.it/ShvcnB pic.twitter.com/VfBNaYkxni

Saw this video today in a webinar and felt compelled to share it! youtu.be/2g88Ju6nkcg

About 3 days ago from Time2Mrkt's Twitter via Hootsuite Inc.

24 Ways to Get More Subscribers on Your YouTube Channel [Infographic] dlvr.it/ShlWHW pic.twitter.com/afcbhaWhfO

How to Keep People Watching YouTube Videos to the End dlvr.it/Shb7hH pic.twitter.com/bwvkJDRgha

Planning for 2023 – Defining Your Brand and Content Mission dlvr.it/ShVTpF pic.twitter.com/JyIbUJ9AAs

How to Build a Brand on Instagram That Stands Out and Thrives dlvr.it/ShR6gB pic.twitter.com/KdPJgPk6zt

How to Get Facebook Ads Working for You in 2023 dlvr.it/ShGqKh pic.twitter.com/uGcd1U3TWh

What our Customers Say!

Dee's company, Time2Mrkt, was our choice to design, coach and mentor AirPSG in social media. We were so impressed with what she taught us in a short time that we invited her to become our strategic partner in developing a social media strategy for AirPSG's clients to use in getting new air charter customers.

Dee and I have worked together successfully since I have been in the Elgin area, and she has been a phenomenal resource. By assisting me in learning to better utilize social media, especially Linked In, I have been able to establish new business contacts, and reconnect with former associates. She is an excellent teacher, and trusted colleague.