Almost everyone I know uses the phrase “Google it” when referencing an internet search. But other than searching for something are you making the most out of a Google account for your business?  Let’s review a few of my most favorite tools.

Google Maps – if you haven’t optimized your Maps presence, jump on board.  There is a new 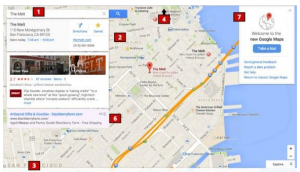 interface that Google announced that is going to help your business look even better. Notice the pictures of the selected location.  You can even hire Google Certified photographers to record a 360 degree view of the inside of your establishment.

Google Place Pages – are merging with your Google+ business page.  So make sure that your information, categories, contact info and links are all up to date.  If you have a page out there, claim it so that you don’t have reviews that are going unnoticed. Link here to see my page.

G+ posts and images – are now being indexed in search results.  If you aren’t using your G+

profile at least occasionally, your likelyhood of ranking very high in search results diminishes.  Also, if you have a blog, add a Google Authorship plug-in that will provide a headshot and minimal information about you in the search results.

Google Hangouts – jump on before they raise the price!  Right now you can have a video conference with up to 10 people, screen share, chat and do silly things with your screen image.  This is a great way to have a face-to-face meeting without having to leave your desk.

Google Drive – share documents that are editable with other users.  Have a spreadsheet that needs to be filled in and you are tired of having to make corrections?  Share it on Drive and let the other people take responsibility for filling in their own information.

YouTube – is the 2nd largest search platform and it isn’t even a search engine. It is a Google

property as well.  You can link to it from within Google Chrome.  Talk about search engine results – put a video on YouTube and Google loves it. Check out my channel with how-to videos here.

Google Chrome – for all of you IE users out there, jump on board.  There are so many plug-in tools available for Google Chrome that I would run out of space and my fingers would grow tired from typing.  Need I say more?

What other Google tools have you found?

The old saying goes a picture is worth a 1000 words.  So if video is a whole bunch of pictures strung together, it must be worth BILLIONS of words.

When you need to know how to do something, where do you go? YouTube is the 2nd largest search engine with over 4 million searches a day.  Will you be found?

Thanks to Kathy at GB Productions, I have an Introduction video and FAQ video.  As I write more blog articles, I include a variety of recorded how-to’s that also sit on my YouTube channel.  Not only is video useful on your YouTube channel, but it can be added to LinkedIn Company profiles, embedded on your website, into blog posts, shared on Pinterest and Facebook, and on and on.

When you need to know how to do something, where do you go?  Will your business videos be found when potential customers are searching?

When I speak to groups or to individuals, one of my standard questions is do you have a

LinkedIn profile, Facebook profile, Twitter handle and do you have a company page for each of those?

Recently I read an article entitled Why Google+ Wont Succeed.  The basis of the article is that people don’t like to dance alone and there aren’t enough people on the dance floor on Google+.

When I started in social media everyone spoke about the “Big 3” that referred to LinkedIn, Twitter and Facebook. I feel that people still tend to think of those before some of the other networks – like Google+.  Do you have an account on G+? for you?  for your business?

Facebook as of March 2012 had 901 Million monthly active users and Linked in has 161 Million professionals.

As of April 2012 Google+ had only 170 Million users but there are predictions of 400 Million by the end of the year.  Again, do you like to play on a playground that no one else is using?

Pinterest is another animal.  With only 10 million plus users, the demographics on that is a bit more defined.  It is a good tool for the right user and audience, but so are Flickr and Picasso.

Picking the social networks that are the best for your company can be the biggest challenge, but participating in at least one is crucial for you to stay in front of potential clients.  Setting everything up to have a consistent brand is important and engaging your audience is critical.  How often and on how many channels to choose to engage is up to you, your time or your budget.  Sometimes just getting your feet wet and scheduling some time to do the updates is the start of something new and exciting.

Should you need guidance or assistance, there are firms like Time2Mkrt available for your support.  Call on me or them, but get started soon.

I love when I learn something new.

I have had my YouTube channel for quite some time.  I set everything up when I decided on a company name.  The channel has been sitting out there alone and unloved, until today!!!

I needed to show a client a how-to on changing their Twitter background.  So I enlisted the help of a new tool – Jing (recommended in this post) to complete a screen capture.  The beauty of it is, I was able to upload it directly to YouTube.  Just that simple. (three takes later).

The point is, using social media to help others and promote your business can be as easy as having the right tools.

Want to see the video?

What you need to know about Google Web Designer, a primer dlvr.it/SdtrsG pic.twitter.com/xxqW2NOKx8

About an hour ago from Time2Mrkt's Twitter via dlvr.it

Have you read - Who is Andrew Tate? And why is the controversial figure taking over TikTok? dlvr.it/SdqfBQ #TikTok - your thoughts? pic.twitter.com/re0IKFMpLg

Have you read - Meta's AI chatbot is an Elon Musk fanboy and won't stop talking about K-pop dlvr.it/SdlhlX #Instagram #ElonMusk - your thoughts? pic.twitter.com/OLOFbiYwxn

Cringey LinkedIn posts like the crying CEO are inspiring a culture of backlash dlvr.it/SdZtmS pic.twitter.com/MFCta9qPbh

Have you read - Your Spotify home page is getting a makeover dlvr.it/SdG0NS #Music - your thoughts? pic.twitter.com/F58QBMKsrA

What our Customers Say!

Dee's company, Time2Mrkt, was our choice to design, coach and mentor AirPSG in social media. We were so impressed with what she taught us in a short time that we invited her to become our strategic partner in developing a social media strategy for AirPSG's clients to use in getting new air charter customers.

Dee Reinhardt is a high energy professional with many tools to help move your business forward.